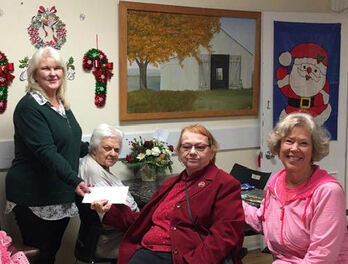 Melanie Davis, Executive Director of Holly Place, and a resident receiving a check for $2,120 from WCREPA co-presidents Sheila Metzel and Cathy Grantham.  The donations were collected from members at the Winter Holiday Luncheon at the Ramada on December 13, 2019.
A matching grant made the donation value to be $4,240. 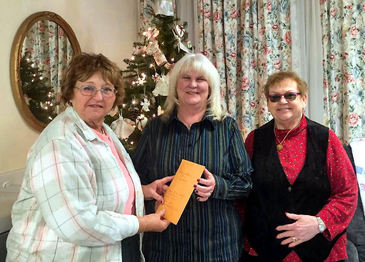 HOLLY PLACE 2018
Bonnie Brown (left) and Sheila Metzel (right) Co-Presidents of WCREPA are presenting donations in the amount of $1,472.00 to Melanie Davis, Executive Director of Holly Place. The donations were collected at WCREPA's annual Holiday Luncheon on December 7, 2018.
Because of a community matching program, the worth of our donation doubled to $2,944.00.​​ 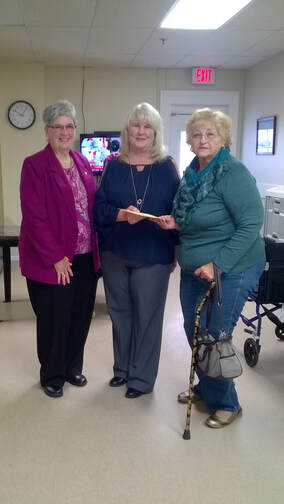 Kathleen Pleasant (left) and WCREPA Co-President Bonnie Brown (right) presenting donations in the amount of $1,150.00 to Melanie Davis, Executive Director of Holly Place.  The donations were collected at the December 1, 2017, luncheon at the Ramada Plaza. 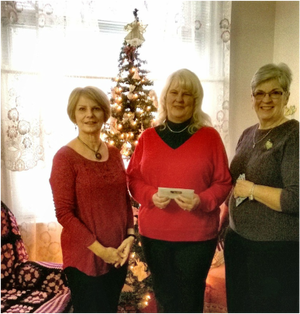 Co-Presidents Debbie Banister and Kathleen Pleasant presenting checks totaling $1,406.00 to Holly Place.  Members donated the money at the Holiday Luncheon or sent their donations to the Treasurer. 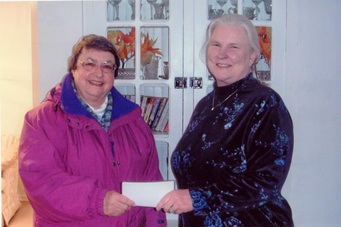 Holly Place is an assisted living home, located at 268 South Potomac Street in Hagerstown, MD.  It was organized to serve those who cannot afford commercial assisted living and have no other place to go. Some residents have no income other than Social Security and some have no family remaining. Holly Place serves 15 residents in a clean, safe and homelike environment. Donations for Holly Place were collected at WCREPA’s 2011 Christmas Luncheon.  Phyllis McCleaf is presenting the check. 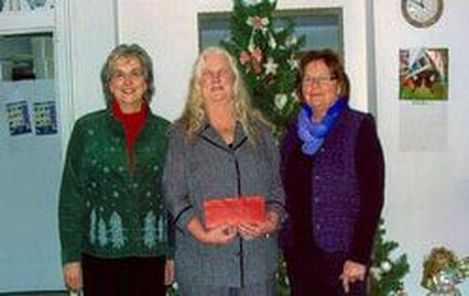