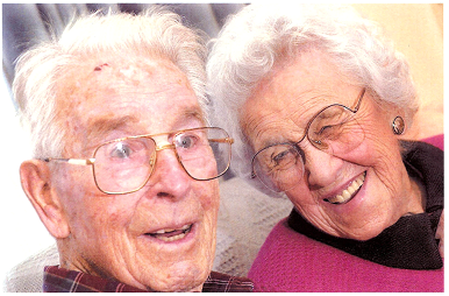 The late Nellie and Emmett Lake Lytton celebrate their 60th wedding anniversary in this file photo. The couple left almost $200,000 to the Washington County Retired Educational Personnel Association for scholarships.
Lyttons' generosity lives on in gifts

According to their friends, Nellie and Emmett Lake Lytton always insisted on picking up the tab. Thanks to a trust fund the Lyttons set up for education, the late couple's generosity will live on. "Over the years, we became very close friends, and they were like parents to us," said 75-year-old Gloria Donat, who first met Nellie Lytton during World War II.

Future generations also likely will benefit from the Lyttons, who lived into their 90s. The couple, who were childless, left almost $200,000 to the Washington County Retired Educational Personnel Association for scholarships, association president Leon Brumback said. The money will allow the association to carry on or expand its tradition of handing out three $1,000 scholarships a year, he said. "It's just phenomenal that someone would just think that much (of education) and want to give that much to that level and for that purpose, so certainly they loved kids, they cared about kids," Brumback said by phone Thursday. A retired social studies teacher, Brumback now works security at the front desk of The Herald-Mail.

Nellie Lytton, whose maiden name was Itneyer, worked at a variety of schools in the area, said her niece, Iris Carolyn Stickell. Nellie Lytton died Jan. 26,2005, at the age of 97, three years after her husband of 60 years died at 93.

As a school teacher, Nellie Lytton was always independent, Stickell said. "Nobody can do anything right but a school teacher, believe me," Stickell said Thursday during an interview at her home. Both Lyttons loved children, Stickell said. Emmett Lake Lytton, who was known as Lake, always brought suckers to Shiloh United Methodist Church for the children, she said. "They got along very well. It justseemed like they had the same ideas about what they were going to do in their retirement, and they did it," Stickell, 79, said.

The Lyttons had many, many friends, Donat said. They would do anything for anyone who asked, she said. "They were very, very special. I don't expect to ever meet anyone who could compare to them," Donat said.

The Lyttons traveled the world and shared their experiences with students in the classroom, Gloria's husband, Don Donat, said. "She was a great lady, and he was, he was a real Southern gentleman," he said of the Lyttons. Emmett Lake Lytton was born near Blacksburg, Va., and never lost his Southern accent, Gloria Donat said. Though the couple left few survivors only two nieces, including Stickell, remain from Nellie Lytton's side of the family - they have passed down their legacies. A foundation scholarship bearing their names provides help to students pursuing a career in education at Hagerstown Community College.

According to Gloria Donat, Nellie Lytton was overjoyed to meet a few of the college students she had helped. According to Donat, Lytton had been teaching school many years before she finished her bachelor's degree in 1941 - the same year she married Emmett Lake Lytton. At funerals for Nellie and Emmett Lake Lytton, the pews were packed, Gloria Donat said. Despite their advanced age, many people remembered the couple. Gloria Donat still gets emotional when she talks about them. She said she believes they're still together.

"To know how cute they were, it just brings it all back, but you know you can't keep them forever, that's just the way it is," she said.